I like the way the picture finishes the story I’m about to tell. The people in the picture are Howey, Duck and guests.

Octo ran down the corridor frantically and bumped into Piggy.
– What go on? You mad crazy thing?
– Piggy! – Octo panted, – help! All the guests are gone and the rooms are filled with SOGGY CORNFLAKES!!!

And with that, Octo fell on the floor in a dead faint.

Howey and Duck ran to help Octo up. Duck looked around, took out a pair of sunglasses from his armpit and put them on.

– It looks like a job for Duck Tracey, the famous private eye! – he quacked. – You will assist me! – he pointed at Howey, who immediately straightened up and looked at others with superiority. – Come! there’s no time to lose!

The two detectives marched down the hall to the kitchen. Unfortunately, but rather predictably, there were lots of empty cornflake boxes. Duck examined them closely.

– All is clear, – he said and walked down the hallway to the storage cupboard. He threw open the door and there were the guests, packed like sardines in a can.

– Simple, – said Duck. – There was a message on the hotel intranet about washing bedclothes and getting more cornflakes. But it got garbled into needing to wash cornflakes on their mattresses. The rest is self-explanatory. The guests took the cornflakes and started washing them; the cornflakes got soggy and expanded; the guests ran for cover and hid in the cupboard. And now it’s time for my cocoa shower.

And he marched off.

– Did I miss something? – panted Narwhal, running to his friends. – I was just washing cornflakes on my mattress. 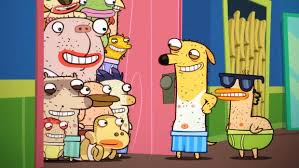 And, here’s your fab header.

I’m writing about picture B.

It was a long day at the Banana Cabana, and Octo the desk clerk was exhausted. In fact, all eight of his tentacles were sore. First, his boss (and best friend) Howie had spent the day walking around with ice in his pants. Then Duck was playing drums in the corner of the lobby. Poor Octo could barely hear the guests as they complained about slipping in the ice water in front of the counter. It was a long day.

To make matters worse, when the time came for lunch, Octo could see that the elevator to the cafeteria was crammed full of guests again. So he looked under the counter and found a cheese and bean burrito that he had stashed away for just such a contingency. He was so busy he just snarfed the burrito down without giving it much thought. It turned out to be a big mistake!

At the end of the day, as Octo was making his way back to his room across a lobby full of people lying in puddles of water (while Duck added a little drum roll every time someone fell, so it was like a comedy show), he felt a little pressure in his tummy. He let go of what he thought was a little gas bubble. But it turned out that he accidentally followed through! Now he was touching cloth, and had to walk past all these people! What if someone noticed his new brown tentacle? What would Octo do? Luckily, Howie, Narwal (the resident singer) and a few guests all managed to catch a whiff and start salivating about cheese and bean burritos. This gave Octo the chance to rush to the bathroom and drop a load unnoticed by the guests. Phew! Octo was relieved, in more ways than one! 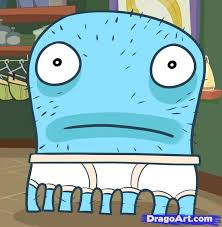 Mike, your page will be up soon.

I am a girl from England, who likes to blog. I suffer from lightheadedness and stomach cramps, and I have an anxiety disorder. Bloggish has been running for over 3 years, and it is the place where I vent or just talk about my life. I usually post about once or twice a month, so don't expect much from me. Chaio! (This is not misspelled on purpose, I actually thought that's how ciao was spelt, so you will have to live with that, don't worry, I'm a grammar nazi too ;) ) ~bloggerofthebloggish :) View all posts by bloggerofthebloggish

This site uses Akismet to reduce spam. Learn how your comment data is processed.

Blogs you should check out when you’re bored

This is a book that I am writing.

Why was there a gunpowder plot?
☆bloggish☆

The one-stop place for your lifestyle needs!

An Eccentric Teen's Point Of View

Ramblings From A Rather Awkward Teen

Sky of Stars
The WordPress.com Blog

The latest news on WordPress.com and the WordPress community.

There's Nothing Better Than A Friend- Except For A Friend With Chocolate!!

Updates, News, Videos, and ME!

Books, Football and All Things Nice